Fenestra, also known as Fen, is a grey Magnificat who greets Morrigan and Jupiter at the Hotel Deucalion, where she is head of housekeeping. As a Magnificat, Fen is a giant sentient cat who is able to speak and understand humans. Fen often acts as though she does not care for Jupiter nor Morrigan, but shows many acts of affection and compassion through the books which prove otherwise.

"She's. . . competitive. Goes back to her days as a cage fighter"
―Jupiter telling Morrigan about Fen's past[src]

Fenestra was a known cage fighter on the Ultimate Cage Fighting circuit. She fought for an unknown number of years before she became the Free State cage fighting champion for three years in a row. Directly following this, Fen ended up in a scandal involving the former Prime Minister's son. This was probably linked to a fight of some sort as he was mentioned to have received a new nose.

Sometime after this, Fen came to work at the Hotel Deucalion. It is unknown what position she started as, but Fen eventually became Head of Housekeeping before Morrigan arrived.

Morrigan: "Fen, what if I fall off?"
Fen: "You'll probably get trampled and die. So don't fall off."
— Just before the Chase Trial begins[src]

To Fen's reluctance, she is chosen as Morrigan's steed for the Chase Trial. Fen is incredibly competitive, pacing and snarling even before the race begins. Morrigan finds it difficult to stay on Fen's back as they ride, having to cling to her fur. Cadence's steed, a rhino, attempts to take out any competition and aims for Fen, deeming her the biggest threat. As the rhino finally catches up to Fen, it shoves into them. Fen manages to swipe the rhino across the face with her sharp claws before it can do any damage to her and Morrigan. Cadence, who has had no control over the rhino, is thrown off her steed into the street. Although Fen is at first reluctant, Morrigan and Fen turn back to save her from being trampled. Fen, still out to get a gold target for Morrigan, leaps into the air and onto a statue with Morrigan and Cadence on her back. Fenestra is furious that Morrigan is not allowed to continue on after Cadence lies and gets through, though is present when Morrigan does get an invitation to go to the next trial.

-Always has a grumpy face

Usually very grumpy, short-tempered yet throughout Nevermoor there are little flickers of shown kindness towards Morrigan. As shown during the chase trail, she can be very competitive.

Fenestra from the Nevermoor Swedish cover by Mats Minnhagen 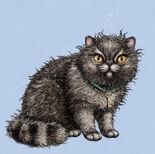 Fenestra from the German Edition
Add a photo to this gallery

Retrieved from "https://nevermoor.fandom.com/wiki/Fenestra?oldid=1746"
Community content is available under CC-BY-SA unless otherwise noted.