John Arjuna Korrapati, better known as Jack, is a secondary character in the Nevermoor series. As Jupiter North's nephew, he stays at the Hotel Deucalion when he has breaks from his boarding school. He and Morrigan Crow have a rivalry when they first meet, which slowly becomes a playful friendship.

Little is known at this point about Jack's past. He mentions in Nevermoor that he has been living at the Deucalion for the past five years.[1]

Jack has warm brown skin, straight white teeth, and —most noticeably— a patch over his left eye. It is mentioned that he had black hair and brown eyes.

Jack is sarcastic, playful and cares deeply about those who are close to him. He usually prefers others not to nose into his private affairs.

He is shown to be helpful, as we saw when he gave blackpapers to Morrigan in case she needed it, and also when he found the truth about Jemmity park. Jack is a firm Yule Queen supporter and hates Saint Nick, calling him a fraud and "enslaver of elves".

There isn't much known about Jack's life and his family other than his uncle Jupiter North.

Jack, like his uncle Jupiter is a witness. Because he hasn't mastered his knack, Jack wears an eye patch over his left eye to act as a filter so his power doesn't make him insane. Described by Morrigan as a dubious knack.

Jack has some level of musical aptitude as it is mentioned that he takes cello lessons and plays in his school's orchestra.

Jack and his uncle, Jupiter, have an extremely close bond. They often joke and have fun together. Jupiter was the first to know of Jack’s knack (being a witness) as they obviously trust each other extremely much.

At first wary of Morrigan, Jack was quite rude to her and they would often exchange spiteful remarks. Eventually however Jack warmed up to Morrigan and they became good friends.

Jack attended the Wundrous society show trial to support Morrigan as a friend.

Morrigan knew how it must feel for Jack to be a witness, to see things from the Gossamer which other people can't and make sense of the madness. They often play a game in which Jack tells Morrigan how each visitor at the Deucalion is thinking or feeling.

Sam is described by Jack as his friend from the Graysmark school. It is also known that he was born in a very poor borough called Gresham. Sam helped Jack to find Jemmity Park where he used to play as a kid.

Tommy is Jack's friend from his school. He used blackpapers to cheat on tests and eventually got himself suspended.

John is the English form of the Latin Iohannes, itself a form of the Greek name Ιωαννης (Ioannes) which was derived from the Hebrew יוֹחָנָן (Yochanan) meaning "YAHWEH is gracious."[2] Jack is derived from Jackin (earlier Jankin), a medieval diminutive of the name John. Jack is often regarded as an independent name instead of only a nickname.[3]

Arjuna (अर्जुन) is a name of Sanskrit (Indian) descent meaning "white, clear."[4] In Hindu texts, Arjuna was the name of a hero, the half-mortal, half-divine son of Indra who bested even his father in combat.

Korrapati (కొర్రపాటి) is a location surname. It combines the Telugu పతి (pati) meaning "belongs to" with the place, in this case, an area called Korra or Korrapalem.[5] 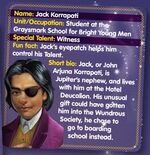 Jack from the cover of Nevermoor